Haiti After the Hurricane: New Updates from the Field 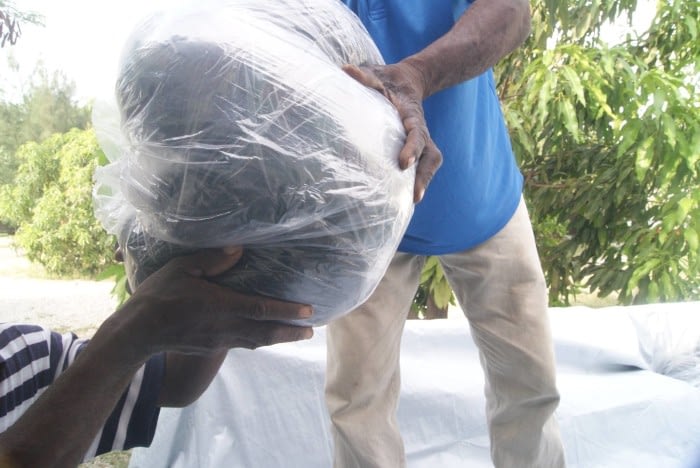 Seven years ago the earth shook in Haiti and just over four months ago the tiny Caribbean nation was hit by Hurricane Matthew. Friends of Fe y Alegría, along with our partners at the International Federation of Fe y Alegría, was working in Haiti long before the earthquake struck in 2010. Both organizations have long considered education as an effective means of overcoming poverty and, after the earthquake, in a devastated context and without a solid infrastructure, access to school became an even greater priority. More than 5,000 schools were destroyed and some 500,000 children were left without access to education. As a result, we believe it is important to send the latest updates from Haiti, as prepared by our partners at Foi et Joie Haïti.

In Désormeaux, the harvest time has arrived for some families.

By the end of 2016, over 300 families received seed kits to recover their farming activities destroyed by Hurricane Matthew. Families used all the seeds delivered to them and 80% of those who have benefited from this intervention are back to work. Finally, several families have begun to collect/harvest the products of their hard work, including spinach and peppers, which are already sold in Dame Marie markets, while others, such as tomatoes or leeks, continue in nurseries.

However, the garden-school has not progressed. Fortunately Fr. Abraham, the director of the school, has found a new space to revive this garden-school and a better way to make it more productive and useful for the local community.

The challenge of finding water.

Despite the enthusiasm of the community and the recovery of hope promoted by Fe y Alegría, farmers have had difficulty finding water. It hasn’t rained for many days in Désormeaux and community members have used the little cattle that they have left to go to fetch water. The impact of this setback is worsened by the fact that these plots of land are very large. Some community members estimate that it takes 4 to 5 round trips to find water, but this still is not enough to satisfy the need.  On a positive side note, the construction of a local bakery is advancing by leaps and bounds.

The inhabitants of Désormeaux have been fortunate to have had the leadership and generous spirit of Fr. Abraham. Thanks to his efforts, and the support of the national team out of Port-au-Prince, hope has been reborn in Désormeaux. The efforts to rebuild in Désormeaux, one of the worst affected areas in Haiti, will now move on to other educational communities. Starting in February, rebuilding efforts and workshops will take place in the communities of Arreguy and La Montagne. The agronomist Maxo Etienne will provide seed kits and will also be responsible for providing training on the manufacture of natural pesticides and for planning after harvest. In March, Jean Rabel will debut a new program on goat breeding.

For more information on the immediate effects of Hurricane Matthew and our response, please click here and here.