Hurricane Matthew, a Category 4 storm with winds up to 143 mph, made landfall near Les Anglais, Haiti late on Tuesday, October 4th before crossing to Grand’Anse en route to Cuba and the United States. The worst hurricane to hit this island nation since 2007 has to date left more than 2.1 million affected (894,000 of whom are boys and girls) and more than 1.4 million in need of humanitarian assistance. The number of displaced persons currently stands at 175,509, of which 15% are children under the age of 5 years old.

Our local partner – Foi et Joie Haïti – has sprung into action, assessing damage on the ground to address first response needs and develop a long-term plan to address the ever-growing disaster. 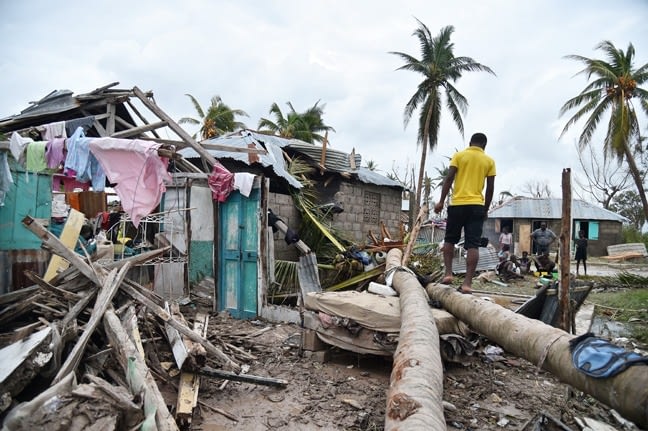 What is the current situation?

[UPDATE, 11.22.16] More news out of Haiti, as photos from Foi et Joie’s school in Canaan show that despite being completely flooded by heavy rains, the school has made a donation of 17 boxes of clothes and 3 boxes of shoes for another Foi et Joie school in Desormeaux (Grand’Anse), which was the most badly affected by the hurricane. Students have included in the donation boxes drawings of how they would like Haiti to be and how it currently is after the Hurricane Matthew. 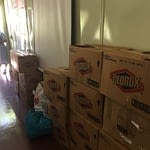 [PREVIOUSLY, 10.17.16] According to our local partner, Foi et Joie Haïti, affected communities are living in a situation of extreme food insecurity: “There is no potable drinking water in some areas and people are surviving on coconut water and bananas and it is estimated that within two weeks they will have no access to food.”

In addition to the situation of food insecurity, access to education remains precarious. According to UNICEF, at least 430 public schools (representing 40% of the country’s schools) and 116,000 children have been affected and another 178 other schools are being used as temporary shelters. The number of Foi et Joie Haïti schools affected by the hurricane has decreased from 12 to 10 (which directly affects 1,597 students and 145 school staff).

A six-person team from Foi et Joie Haïti’s national office left Port-au-Prince last Wednesday to conduct an emergency intervention for the Desormeaux (Grand’Anse) community. This first stage of intervention has two objectives: (1) provide an immediate response to basic needs (food, shelter, etc.) for affected communities and (2) normalize school life. In response to the first objective, Foi et Joie Haïti is in the process of distributing food & hygiene kits and construction kits. To date, 304 food kits and 388 personal hygiene kits have been delivered.

Preparation of food and hygiene kits.

[PREVIOUSLY, 10.13.16]  Foi et Joie Haïti’s national office has communicated the following: the situation in Désormeaux, Grand’Anse (located in southern part of the country) is “catastrophic” and at least one Foi et Joie Haïti school has been destroyed. The community at large has also suffered, as the majority of families had their homes damaged or destroyed.

Over 500 families in Jean-Rabel (in the northwestern portion of the country) have lost their homes. The area, where Foi et Joie Haïti has six schools, also suffered devastating agriculture and livestock loss, which have up until now represented guaranteed sustenance for local families.

[PREVIOUSLY, 10.07.16] The southwest and northwest areas of Haiti have been the most badly affected; communication and road access at this time remain impossible. Urban areas, like Port-au-Prince, are facing the threat of devastating diseases such as cholera due to stagnant water. Food security is an additional problem as the UN Office for the Coordination of Humanitarian Affairs estimates that 80% of crops in affected areas could be lost.

According to UNICEF, the Ministry of Education is reporting severe infrastructure damage to over 300 schools in the southern departments  of Grand’Anse, Nippes and Sud, affecting as many as 100,000 children. Another 156 schools are currently being used as temporary shelters.

What can you do?

After conversations with our partners in Port-au-Prince, Friends of Fe y Alegría activated our emergency protocol in order to assess the current situation and undertake necessary humanitarian support together with Foi et Joie Haïti (Fe y Alegría Haiti in French), which has 17 schools and community centers across the country.

At this time, Friends of Fe y Alegría’s response and fundraising efforts continue to be directed towards (1) repairing and rebuilding damaged educational spaces to ensure local children and youth can return to their schools as quickly as possible; (2) giving care and support to affected communities and families; and (3) providing psychosocial support, especially for children.

The normalization of school life as quickly as possible is crucial to avoid academic regression and to provide an atmosphere of normality and protection for children who have experienced trauma. Through our efforts we will promote this normalization, provide school supplies and conduct emergency reconstruction of damaged schools as needed.