Hurricane Eta, a Category 4 storm with winds that peaked at 150 mph, made landfall south of Puerto Cabezas, Nicaragua on Tuesday, November 3rd. Since then, the hurricane has weakened to a tropical storm. Local authorities, however, have warned that flooding and mudslides are creating a slow-moving humanitarian disaster. As of Friday morning, at least 57 individuals have died.

The slow and gradual trajectory of Eta, with its heavy rains and the high environmental and social vulnerabilities of the population and infrastructure, are reminiscent of Hurricane Mitch, which devastated the region 22 years ago.

The storm is projected to continue wreaking havoc in the days ahead, as it moves up through Central America and the Caribbean, potentially affecting Guatemala, El Salvador, Belize, Jamaica, México, Haiti and the Caimán Islands. 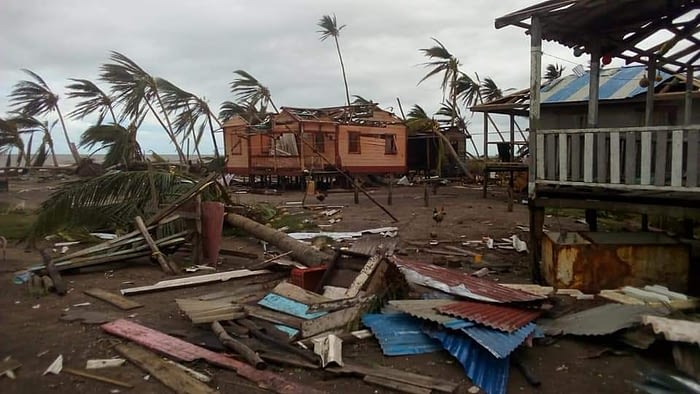 [Update, 11.10.20] In Honduras, Valle de Sula, one of the most affected areas, 1,600 individuals were affected, 37,000 were in shelters and more than 60,000 were evacuated. “At this time, many people from cities in the valley are still on the roofs of their houses waiting to receive food and water for the first time in 3 days or be rescued” says Yolanda Gonzáles Cerdeira, from the area of Human Rights investigation of ERIC-Radio Progreso.

In Guatemala the number of affected individuals rises to 104,000. We are following closely how the situation in the most affected areas (Chiquimula, Zacapa, Alta Verapaz) continues to evolve.

In Nicaragua, 130,000 individuals have been affected, many of whom have partially or completely lost their homes and now face a lack of access to water, sanitation and food security. Around 47,000 individuals are being held in shelters.

[Previously, 11.07.20] We received news from our partners Fe y Alegría in Guatemala as Eta’s slow rains started flooding the region, causing deadly landslides, loss of electricity and the isolation of various vulnerable rural areas. Although the storm was not expected to be felt until Thursday, on Wednesday the country was already experiencing heavy rains. There were no talks of evacuations and no shelters had been set up, the country was not prepared. It is estimated that around 75,000 have been affected by the hurricane and at least 150 individuals have lost their lives.

[Previously, 11.06.20] Nicaragua and Honduras have been the most affected areas of Central America, with a storm surge that has led to severe rains and flooding, as well as heavy winds that have caused landslides, devastated homes and destroyed roads.

In Nicaragua, at least 20,000 people were evacuated prior to the storm hitting and hundreds of shelters were set up. To date, the Nicaraguan government estimates as many as 30,000 citizens in the coastal region have abandoned their homes. UNICEF estimates Eta has affected as many as 1,227,000 people, including 500,000 children and, according to the Empresa Nacional de Transmisión Eléctrica de Nicaragua, at least 12,000 homes have been left without electricity. 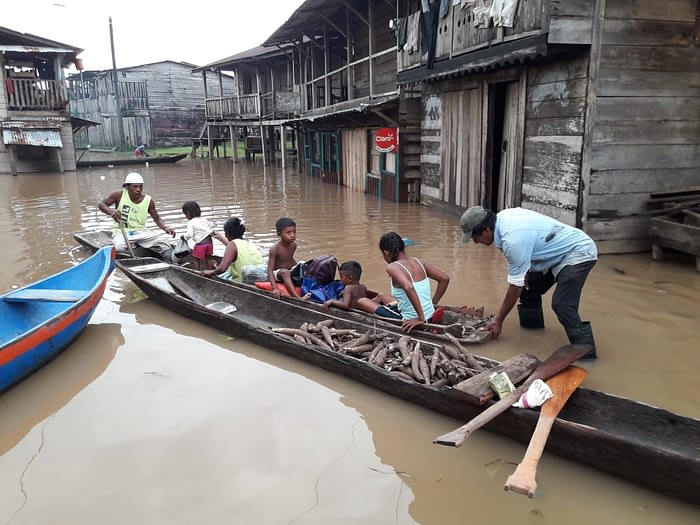 In Honduras, more than 2,000 people were evacuated according to the country’s Permanent Contingency Commission and many shelters have reached capacity. The country has been experiencing severe flooding since Monday, as approximately 339 homes have been destroyed and more than 38 rural communities have been left isolated due to the destruction of about five bridges and 14 roads.

El Progreso and el Valle de Sula, where our partner Fe y Alegría has many educational centers, are highly vulnerable low-land areas bordering the Ulúa River, the largest river in the valley. Local authorities have projected that the Ulúas flooding during Hurricane Eta has the potential of being larger than the one during hurricane Mitch.

We have yet to see the outcomes and Eta’s devastation, as the NHC projects that the storm is expected to linger over the region for the coming days, bringing “catastrophic, life-threatening flash flooding and river flooding, along with landslides” over more parts of Central America.

[Update, 11.10.20] Up until today the situation our partners at Fe y Alegría are facing on the ground is as follows:

In Honduras 3 educational centers have been affected, which have also been serving as shelters. The Centro Urraco has flooded with people inside and has been cut off since Friday in the morning, we have not been able to communicate with them. Radio Progreso, has not had the possibility of broadcasting and has internet problems.

In Nicaragua, the areas where Fe y Alegría is present in the country, had no major victims. The storm mainly caused material damages in about 10 educational centers.

In Guatemala 2 educational centers have been affected, those that have not been affected will be used as shelters, all resources that are gathered in these centers will be directly distributed to the community or will be delivered to other institutions for distribution.

We are reminded by our partners that, like in any other natural disaster, “emergency does not end with the rain, since in a country like ours, with so many challenges, a natural disaster of this magnitude has a long lasting impact”.

[Previously, 11.07.20] In Honduras, Fe y Alegría is working to aid the community by delivering food and clothing as well as supporting rescue efforts.

Fe y Alegría Guatemala, has developed a humanitarian emergency response plan to battle Eta’s many repercussions. Educational Centers will turn into provision collection centers, transportation will be setup to deliver emergency relief packages and psycho emotional aid will be provided to all affected. In the midst of this crisis, we cannot forget there is still a global pandemic, to ensure all necessary measures are taken to minimize the spread of the virus, Fe y Alegría developed a COVID-19 safety protocol for all donated provision such as food and clothing.

[Previously, 11.06.20] Our local partner Fe y Alegría has mobilized in both Nicaragua and Honduras, utilizing school buildings as shelters for evacuated communities.

The North Caribbean Coast of Nicaragua, a rural area already exposed to extremely vulnerability, was hit with full force. Fe y Alegría Nicaragua has informed us that they still have not been able to reach the most remote communities, and that the situation is truly disastrous.

Starting on Tuesday, the Centros Técnico Loyola, Bandeira and Nazaret de Urraco, all Fe y Alegría Honduras’ educational centers, were set up as shelters to serve the displaced communities. As the situation has advanced, our partners have informed us that the Centro Técnico Loyola may have to be evacuated due to high risk of flooding, leaving roughly 300 people unprotected. Additionally, Fe y Alegría is distributing nylon tents and awnings to all students who live along rural highways.

After conversations with our partners in the region, at Magis Americas we have activated our emergency protocol in order to assess the current situation and undertake necessary humanitarian support.

This is just the beginning of yet another challenge facing the region, in a year that has already seen the COVID-19 pandemic exacerbate existing inequalities.