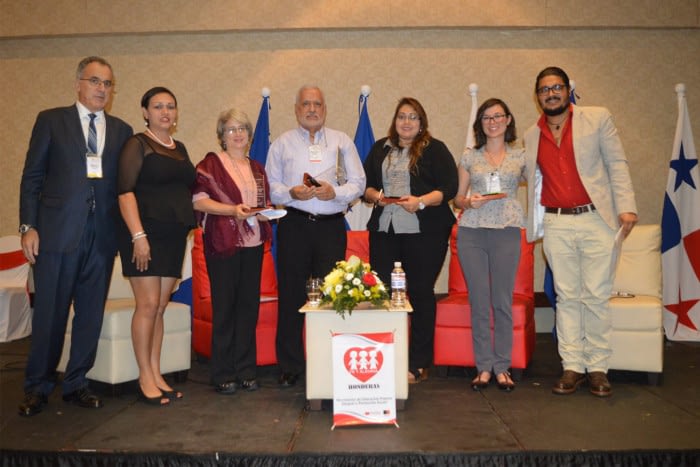 For a greater social commitment to education in Central America

The II Central American Congress of Education took place in Tegucigalpa, Honduras this past July 12-13, under the motto, “Educate in Situations of Violence”. The conference was a follow up to a gathering held in 2016, in which Fe y Alegría and the Jesuit Universities of Central America, affected by the different realities facing the Central American people, questioned how to keep ensuring that education is based on a universal good, while at the same time being public, of high quality, humanizing and liberating of all realities that impede the achievements of the individuals in Central America.

Among discussions by several key actors, time was given to reflect on the reality and context of Central America, ever more disturbed by different kinds of violence and social inequalities. Upon reflection, the main challenge of the two-day event was to analyze and understand environments where schools are located and to determine how to most effectively educate in these new situations.

While there are unique and distinctive elements from the reality of each one of the Central American countries, we coincide with acknowledging that there are some characteristics in common that mark the regional and continental reality. Inside those elements the one that is emphasized the most is the polarization which our societies face, expressed at all levels. The emphasis is not focused on dignifying the human person – expressed in groups and generations of shared wealth. On the contrary, politics and all initiatives led by governments, are oriented to benefit small elites and economic groups that ruthlessly strip towns and communities from their natural resources.

At the same time that media barriers are built at the continental level, where the population can access only the information that interests the dominant economic groups, as an alternative, the use of social media arises, which paradoxically immobilizes youth, but at the same time serves to summon and mobilize people in the rise of new social movements.

In the light of the paralyzing fear provoked by social violence and the despair that is generated by the few opportunities for change, it’s time for debate and the search and construction of alternatives. It is time to accumulate strengths, to gain training about new subjects and realities and above all, to articulate on behalf of the different actors that converge on the need for changes in our society. Inside this process of searching for alternatives, at the same time that small initiatives are built from the local level, where the strength of the community is regained, and the collective is promoted, the need to demand structural changes arises. It should be noted that the economic model, apart from benefiting small economic elites, constitutes a model that propagates iniquity and deepens social inequality, which in short, is one of the causes of social violence in Central America. The way in which poverty increases, confirms that the Central American economic model is dissociated with the national economies.

Combined with this reality, it has been shown that education does not constitute the main goal of the regional governments. This is reflected in the national budgets destined to education at all levels. The educational systems have fallen. Enrollment in primary education in absolutely every Central American country shows that there is a large rate of children that can not go to class. In Guatemala, barely 2.8% of the GDP is invested, leaving out of school nearly 20% of children and more than 60% of adolescents cannot attend school. The same condition is happening in Honduras, where 5.9% of GDP is invested, however, 70% of children that leave school cannot continue in the formal educative system. These percentages are not very different from one country to the other, except in the cases of Costa Rica and Panama, where education has been acknowledged for several years as a strategy to achieve greater development.

The small amounts of investment in educational material in all countries of the Central American region contradicts with the high percentages that are destined to matters of security. In the case of Honduras it is alarming in this matter, in the last three years not only did the budget for defense and security double, but other mechanisms have been created, such as the “security tax”. In other words, instead of allocating more resources to creating new opportunities for youth, more battalions and police have been created, what has led to a militarization of society; that far from constituting a solution to the problems of insecurity, it contributes to a major expression of ways to control the civil population.

Through the Central American Congress on Education, a variety of positive experiences have been shared, oriented toward creating larger involvement and relationships between the community and the school. Many of those experiences have as a foundation processes of research oriented to understanding violence from different points of view. Recognizing and understanding this reality, its multi causality, therefore, requires interventions from different perspectives. Moreover, the need to intervene at different levels is thought about, going from the local and the community experiences that can be replicated at a national scale. At the level of actions that are in the process of development, the most valuable experiences were highlighted such as those that are already underway through the different national delegations of Fe y Alegría, especially in the countries of the so called Northern Triangle, in alliance with different organizations and institutions of civil society; key allies in the processes of investigation include the University Rafael Landivar of Guatemala and the Central American University (UCA) of Nicaragua and El Salvador.

THE GRAND CHALLENGES: BUILDING NETWORKS AT THE NEW FRONTIERS OF EXCLUSION

I.- Deepen the understanding of the phenomenon of violence and its impact in the school environment. This happens by starting to distinguish what “violence towards the schools” and “school violence” are. The first one has to do with understanding all the elements of the context that contribute to causing violence, the first of which includes the inequitable model that does not generate opportunities to all the sectors of the population. On the other hand, more emphasis has been put on school violence – which is produced inside the educational centers as a result of the process of interrelationships between all people that participate in the educational sphere, and not on the violence that is causing education to be paralyzed and in many cases, at the risk of being cancelled in urban and rural areas where the lives of the student population have been put at risk.

In this sense, we demand that national governments address the structural causes that generate violence, as long as there is no answer to these, it is difficult to eradicate it. This happens by warning that the creation of more battalions and militarization of schools and societies, as a strategy to eradicate violence, does not represent an effective solution to this problem.

II.- Rethinking the curriculum of these new realities: an education out of context is nothing more than a pretext for justifying the system.

When analyzing the educational models that are implemented in the Central American region, it has been concluded that these have not been designed to intervene nor be implemented in situations of violence. In this sense, it becomes urgent to rethink in a creative way the model or models that respond to these new realities. At the same time, it is necessary to generate a training process for the educators of long term and new data, so they know the new methodologies and contents that incorporate and respond to Central American realty. Education, apart from being free and mandatory, has to be of good quality and inclusive, consisting of new subjects, respectful of their way of living and of all the conditions that make it possible to live in harmony with other people and with our own Planet.

Finally, it is urgent to establish a political and social pact for education. So that schools can be constituted in the middle of the community, in a space for encounter, creation of opportunities and promotion of new forms of citizenship. This pact should be established on an ethical, pedagogical and political basis as a rejection to stigmatization and criminalization of childhood and youth.