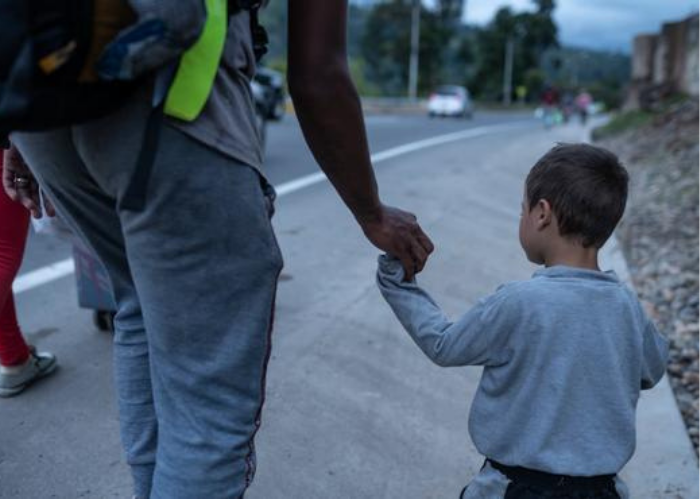 About 6 million Venezuelans have left their country during the first two decades of the 21st century.

About 6 million Venezuelans have left their country during the first two decades of the 21st century, the vast majority have been forced to flee, especially since 2016. This exodus is massive, precarious and multi-causal. Despite COVID-19, the migratory flow dynamics have regained their driving force. The vast majority of Venezuelans who walk, or have settled outside of Venezuela, do so in neighboring countries and in Latin American territory. The Venezuelan diaspora competes with that of Syria to top the world ranking of people in need of international protection. Meanwhile, the situation in Venezuela continues to deteriorate in terms of incompatibility of dignified life opportunities. If the question is to live, shouldn’t the international community offer a humanitarian response, with full access to rights and guaranteeing due protection? On World Refugee Day, we must remember that the Venezuelan exodus is an exodus of people seeking refuge.

From our perspective of a Network focused on Migrants, we could be tempted to fix our gaze, alone, on forced migration as a consequence of a country that is publicly and socially broken. We would have plenty of work. Despite the massive humanitarian urgency that the Venezuelan migratory flow represents; despite restrictive policies and various strategies of rejection and expulsion from countries of transit and destination; despite the growing political, media, and social trend that contributes to xenophobia and the criminalization of migration; despite the high risk of the journey, especially for certain vulnerable groups like women and children; despite the general precariousness of the conditions of walkers, etc… Despite all this, we cannot put aside the crisis that is being experienced within Venezuela. A profound multidimensional crisis, in which forced migration is only one of the expressions. A radical change in the internal situation of the country cannot be postponed. Today, Venezuela has an array of reasons that force millions of Venezuelans to flee the country – each time in worse conditions – or that condemn individuals to a life without possibilities (without hope?). Our call for the protection of the Venezuelan people who have left cannot silence the international responsibility, as humanity, to respond today to what is lived within Venezuela.

Let’s go back to the exodus. In recent years, rather than a change in the profile of who is fleeing, we have identified this profile has become generalized. Any Venezuelan is potentially a forced migrant because of the impossibility of accessing rights or the possibility of being subject to true risk within the country, there are not exceptions, but generalized features. For a long time, the conditions for the road have not been a determining factor in making the decision to move. The migratory call increasingly responds to a desperate attempt to live, regardless of the adjective or fundamentally broken right that we place next to it. This supposes an exponential increase in the migratory phenomenon with an absence of a true life project as a migrant, forced migration is proof that life, under certain conditions, can no longer be an expectation. Life is walking.

Linked to the lack of conditions to undertake the trip, we must bear in mind that the migration route, much earlier than at airports or official crossings between countries, begins at the door of the home or community. The internal transit in Venezuela towards the borders – at times remains invisible – posing extreme difficulty and high risks. This internal forced displacement requires humanitarian accompaniment and comprehensive protection. The scarcity of resources, limitations on humanitarian actors in Venezuela, and exposure to risks from legal and illegal frameworks in the country make humanitarian responses highly complicated.

The conditions of international transit propose other peculiarities and risks but fall under the same light as fragility, vulnerability, and precariousness. Crossing the border (either through official or unofficial paths) does not imply a triumphant arrival at a goal, nor does it necessarily imply the culmination of success. The humanitarian situation of the migrant walkers is alarming. There are many actors and situations of risk – trafficking and trafficking schemes throughout the continent, and shipwrecks in the Caribbean, among many others. Countries and the international community as a whole, cannot abstract from the collective responsibility for this map of disasters in the conditions of migration. Restrictive policies, the closure and militarization of borders, and other strategies to deter migration cause the disappearance and death of thousands of migrants, the alarming humanitarian situation, and deportation. Venezuelan forced migration is overwhelming and will continue to overwhelm any attempt to contain it, as long as the root causes of it remain.

The integration spaces in the host countries show very different realities. More than half of the Venezuelan people who make up this mass migration lack a regular situation in the country where they are, this implies an obvious limitation of access to rights and protection. In general, there are no reception policies that are truly comprehensive; that respond to the multiple dimensions of the human being; that take into consideration the differential approaches that respond to particularities of gender, age, ethnicity, sexual identity, and so on. The livelihoods of migrant populations have been especially affected during the pandemic. In many cases, the essential contribution they have made to society (care, food, etc.) has not been recognized. On the contrary, xenophobic discourses are constructed for electoral purposes, denying the human condition of the foreigner and identifying him/her as an invader or criminal. There are still territories that deny or limit access to the vaccine due to immigration status.

Every June 20 the international calendar reminds us of the reality of millions of refugees or people in need of international protection. Most never achieve recognition of their right to asylum. As UNHCR already did in May 2019, as well as a large part of civil society, we affirm that the Venezuelan forced migratory flow must be considered as a migratory flow in need of international protection. States must ensure access to territories and asylum procedures. This cannot be what limits access to other rights associated with any process of regularization and comprehensive reception. For this reason, the Red Jesuita con Migrantes and Magis Americas, along with other allied organizations and networks, within the framework of the Donors Conference in solidarity with Venezuelan Migrants and Refugees held June 17th in Canada, provided a set of recommendations to the international community to make a turn in its political action.

Life is what is at stake, and life cannot wait.