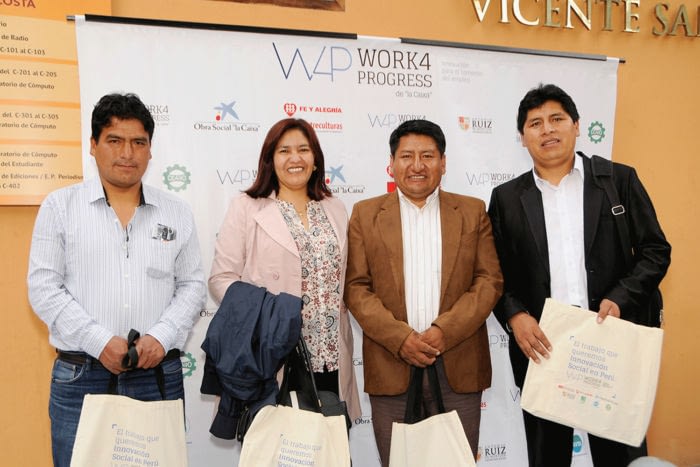 Under the title “The Work We Want – Social Innovation in Peru”, the Work 4 Progress initiative, promoted by La Caixa Foundation, was launched with prominent public and private entities involved and interested in innovation, in employment and self-employment to improve the living conditions of the population, with special attention to women and youth. In Peru, Work 4 Progress is led by a platform of institutions, many of which are Jesuit, including Fe y Alegría Perú, Asociación Jesús Obrero – CCAIJO, Servicio Agropecuario para la Investigación y Promoción Económica (SAIPE), Fundación AVSI and the Universidad Antonio Ruiz de Montoya – UARM. Entreculturas-Fe y Alegría Spain plays a key role in accompaniment and leadership of this process.

At the launch event, attended by 115 people, Marta Solsona Masana, representative of La Caixa Foundation explained that Work 4 Progress is implemented in an articulated manner in India, Peru and Mozambique because they share the same guiding objectives. “The program promotes projects that facilitate the employability of people, providing more and better opportunities through the identification of the most efficient initiatives to generate employment, promote innovation of products, services and processes, and generate a new culture of collaboration among all agents involved in generating employment.”

Work 4 Progress targets rural populations that have not had access to schooling, rural and urban populations with some secondary education, young professionals with technical training and young people without training (first job). Through three stages (listening, co-creation and prototyping), the objective is to obtain new ideas, generate and share knowledge, obtain new characteristics and create a document to replicate the model in other regions.

In Peru, important actions are being taken to reduce the gender gap, as evidenced by the reduction of the Gender Inequality Index, which, according to its recent report, went from 0.433 in 2013 to 0.391 in 2016, an important progress (the ideal is to reach zero) but which still represents a challenge for the country.

For example, according to the National Statistics Institute of Peru (INEI), women working in rural areas are the most vulnerable and only 4.0% are affiliated to the pension system, while in urban areas it is 33.8%. In the case of men, the coverage of a pension system is 15.7% in rural areas and 48.1% in urban areas. These are indicators that highlight persistent inequality in the job market.

This is why the launch in Peru of the Work 4 Progress (W4P) program takes center stage and a strategic presence, since its objective is to create employment and increase the income of women and young people in the Quispicanchi (Cusco) and Condorcanqui (Amazonas) regions through innovative solutions.