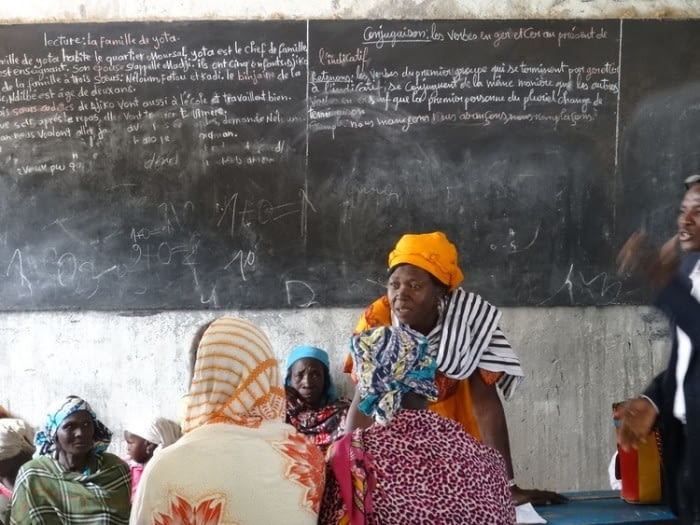 On March 8th, we celebrate International Women’s Day. This day is rooted in the historic fight of women to engage in society on the basis of equality. At Friends of Fe y Alegría in the United States, we want to recover the stories of ordinary women that have played a key role in the history of their countries and communities. We also want to launch an appeal based on the commitment that the international community has approved through the 2030 Sustainable Development Agenda to achieve gender equality and empower all girls and women.

Judith is from Chad and she was the only woman in her community to finish primary school and to access secondary education. Thanks to her education, she has been able to take charge of her own life. Several times a year, Judith conducts workshops together with Entreculturas – Fe y Alegría Spain for mothers and young women that come from different places in the Guera region (south of Chad), about the importance of girls adn women’s education, as she believes thateducating a boy or a girl means educating an entire community.

The question of gender places us at the core of human rights and justice and finds in education a prime tool for perpetuation or transformation. With education, we always transmit values related to gender edentity and the relationships between men and women. It is very important to identify these inequalities and gender-based discrimination and strive for their elemination in educational contexts in order to seek the integral development of each boy and girl, encouraging the development of their abilities. This is what is called “to coeducate”, to ensure that all people are trained equally in a system of values, behaviors, standards and expectations that are not based on gendered hierarchies.

The workshops that Judith carries out are very special for the women in her community. They share experiences, they create joint strategies to make changes in their populations and they receive training on issues that they find cocerning but that, in everyday life, they cannot address due to strongly rooted cultural traditions like early marriage or female genital mutilation. This practices affects 90% of the women in the region.

This training and education leads to empowerment of the women who participate and this is a fundamental strategy for sustainable human development, referring to the increase of participation by women in decision-making processes and access to power, as well as raising awareness of the power that they have individually and collectively which is connected with recovering their own dignity and strengthening their own potential and skills.

Leadership and the Participation of Women

The reality of the women in Chad is discriminatory; nevertheless, it is a less distorted reflection of what happens in Madrid, Buenos Aires or Dubai. According to the Human Development Report of the United Nations Development Program, there is not a single country in the world in which women have the same opportunities.

Even though there have been advances in the discriminatory practices against women, there still remains much to be done. When it comes to education, according to UNESCO, nearly 16 million girls between the ages of 6 and 11 will never go to primary school, compared to 8 million boys that are also denied access. In relation to working conditions, three out of four men of working age are part of the workforce, as opposed to 50% in the case of women of working age.Women still receive a different salary for work of equal value everywhere in the world. Globally, women’s salaries are 24% lower than men’s. When we talk about leadership and the participation of women in public life and politics of their countries, today, women represent 22% of parliament members in the world and there are only 11 women that are Heads of State and 10 that are Heads of government. Promoting leadership and the political and public involvement of women is an indispensable strategy for human development. Only through gender equality and the empowerment of women and girls will we be able to meet the commitments undertaken in the 2030 Agenda.

Last year marked the 20th anniversary of the Beijiing Declaration and Platform for Action, the roadmap that articulated women’s rights. The deadline for the fulfillment of the Goals for Education for All and the Millennium Development Goals (MDGs) has passed as well.

Judith may not have detailed knowledge of the 17 Goals in this global agenda, but she does know that without the participation of the women in her region, it will be impossible to improve the living conditions of her population. Judith should not do this alone. The international community is committed to these goals and we, civil society, must assume them as well as a shared challenge.