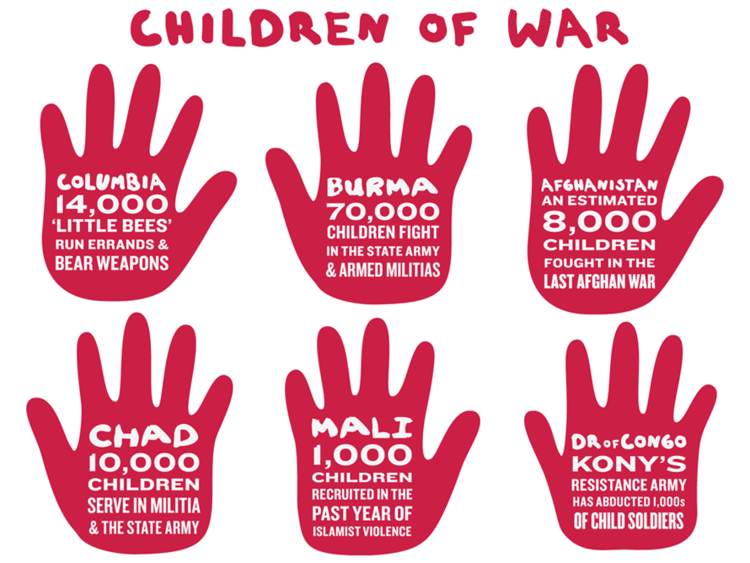 In the world, more than 230 million minors live in armed conflict affected zones. The insecurity situations that conflicts bring, joined together with poverty contexts and vulnerability, made them be easy targets to be recluted as child soldiers for the more than 50 armed groups existing in the world currently. Despite the lack of data about the whole number of child soldiers that have been recluted, the number of countries and territories which commit this violation of human rights goes up to seventeen countries as United Nations warns: Afganistan, Colombia, Philipines, India, Iraq, Occupied Territories of Palestine, Mali, Nigeria, Myanmar, Somalia, South Sudan, Central Africa Republic, Democractic Republic of Congo, Thailand and Yemen.

Today, in the International Day against Child Soldiers, NGOs from around the world, incluiding us, denounce this tremendous non-sense practice in the conflict armed areas and warn about the importance of protecting children by providing safe learning environments and schools not to be used as war targets.

The children that are usually recluted by armed groups ar those who are most vulnerable and least concious of the danger they are exposed to. The don’t always participate actively in the hostility but they are used as messengers, bodyguards, mine detectors, cookers or bomb-makers. Girls, most of them, are usually forced to marriage or to become sexual slaves. They are usually recluted by force, but in some situations, joining an armed group might be seen as a way out to extreme poverty, with limited ooportunities of employment and insecure situations, on which the militia can provide protection from, food and shelter. These situations dash lives of the minors, they are deprived from ther right to have a childhood and their own age. Conflictivity in the world is increasing, as old conflicts are not solved and new ones are arising which are not coming to close ending and on which minors are highly vulnerable to be recluted.

Commemorating this Day, the Fe y Alegría Colombian school, San Bartolomé – La Merced has launched the following video to warn about the dangers and current situation of children in conflict zones living in Colombia and the world.

We expect to keep on working in the margins with children scaping from this vulnerable environmnents so we can, sooner than later, forget to commemorate this sad and disgraceful Day against Child Soldiers.