The participation of women in the construction of a popular habitat: generating urban development in Sol de Libertad 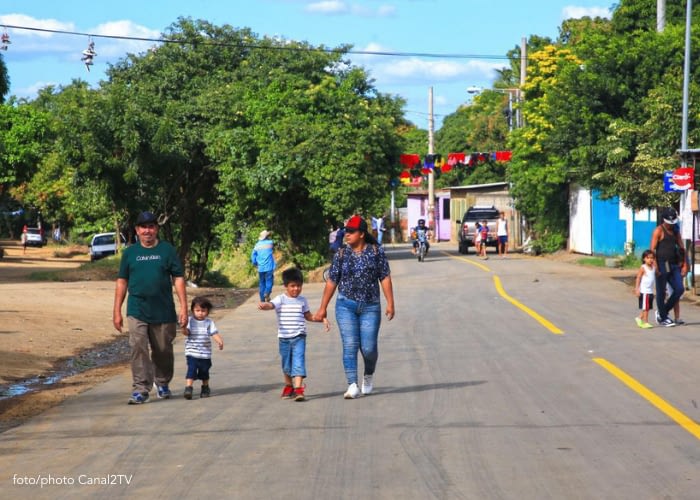 Written by Giovanna Robleto Professor at the Faculty of Hummanities at the Universidad Centroamericana de Nicaragua in Managua, Nicaragua.

Without a doubt, the majority of the world’s population lives in cities, with Latin America being the most urbanized region. Mainly in Latin America, the population produces self-made housing, which emerges in the urban landscape of the main cities, built on the basis of struggle and commitment of the most impoverished sectors, to make a space in the city and thereby seek better life opportunities.

In this short article, I will highlight the role that women have played in the construction of housing and habitat, based on the collective actions undertaken in a neighborhood of informal origin in the city of Managua, Nicaragua. This case shows us that the role of women has been decisive in the construction of their neighborhoods and has disrupted gender roles through various collective actions and organizational practices promoted, which has contributed to a social transformation.

The residents of the Sol de Libertad neighborhood, like many others, have had the courage to leave everything behind and forge a future in the city. They, like many others that live in these types of spaces, build their houses without the support and without services, they do them as best as they can and wherever they can, challenging urban planning.

It is essential to understand the organizational practices, collective actions, and citizenship exercised by the population living in informal settlements to improve their insertion in the city and access to urban services from a gender perspective. The socially assigned gender roles have been disrupted by the organizational practices of the women leaders of the Sol de Libertad neighborhood of the city of Managua.

The narrative of the leading women who obtained, first, urban land and then housing, shows that it is the most impoverished population, the one who commands and leads processes of habitat construction. In the case of Sol de Libertad, the history of the emergence and consolidation of the neighborhood reveals the role that women have played in this process.

Paula Soto, (2018) states that “women present themselves as actors, (…) they give collective responses in the processes of self-construction of housing and in the improvement of infrastructure” (p.23)

Although there are studies that characterize these settlements as sites of low political activity, we find that the mobilization and management, mainly of women, in the production of their neighborhoods, generate important participation processes that transcend the sphere of private space, placing them in the public space.

The women who forged the birth of the Sol de Libertad neighborhood.

In the Sol de Libertad neighborhood, women developed organizational strategies and practices to take control of the land of what is now their neighborhood. Quickly, and favored in the darkness of night, they placed the first posts of what would later become the first houses. They devised strategies to circumvent police security, they organized, and while some went to the municipal districts, others stayed caring for and defending the conquered territory.

While securing the territory, the next task was to access drinking water. To solve this shared need, they carried out a repertoire of collective actions and organized processes. Doña Elsy tells me that she had to get up at two in the morning to get water from the annex to Villa Libertad (neighborhood next to the land taken). Equipped with some buckets, they collected the water to take to their precarious homes. She took advantage of the task of collecting water to take a short bath and wash her clothes, always limiting water use and meeting her needs with what she managed to get. She then had to walk up the extremely stony and steep path to bring the water to her precarious home.

When talking with Mrs. Elsy, Karla, Mrs. Eva, and Maritza, all of the founders of Sol de Libertad, they affirmed that they came to populate the neighborhood despite the adverse conditions of the land, ignoring the danger represented by a natural channel that divides the neighborhood into two and increases in width and depth every year, causing a high risk for the population. They all agree that “it was the only opportunity to get a piece of land to live on.”

“We were afraid that they would come to evict us, we thought that we could not be left without a house, living on the street. I was afraid that my house would be demolished with all the effort we had made. I was worried about seeing all my sacrifice on the ground.” (Cristina)

Sol de Libertad, like other neighborhoods self-produced by the people, is on the other side of the so-called formal city. They constitute territories of difference and inequality marked by the poverty of their ecosystem. Cravino, (2016) characterizes them as “city fragments without city status”. For women like “the makers of Sol de Libertad”, land grabbing was the only option to have a home.

According to the stories of the women leaders and founders of the neighborhood, access to drinking water and then electricity meant a series of efforts, struggles, and resistance that took a period of between six to eight years. In addition, to assuming the costs of materials and labor, which for the poorest populations is extremely more expensive, and of very low quality.

In the struggle to have access to drinking water, Doña Elsy relates: “we, women also work a lot. We ourselves dug to have drinking water ”. Dona Eva adds, “We triumphed with water. It is difficult for the neighborhood. We did the same with the electricity at the beginning, we put it on ”.

Learning from the Organization

The leaders and founders of Sol de Libertad have learned that organizing and working to achieve better conditions in the neighborhood has given them growth as women who distance themselves from traditional roles. The regularization of the land, the management of public services, the preparation of requests for property titles have had results. At the same time, they have taken advantage of non-governmental organizations to access small and flexible loans to improve their homes and to additionally manage projects with local agencies aimed at reducing the difficult environmental conditions that the neighborhood experiences. They have worked to improve their leadership, training, and strengthening their role, as a result, they have revised their needs and turned them into demands and rights.

The organization of these women and their role in improving their habitat, articulated with the neighborhood social fabric, dominate the daily life of their neighborhoods. They were structured in such a way, they were able to meet individual but also collective needs and gaining leadership spaces in the neighborhood organization. The difficult conditions in which they inhabit the city are seen by the leaders as the potential for the promotion of their organization and as a way to realize their utopias and dreams.

The women leaders of Sol de Libertad have generated bonds of trust that unite them with the population that lives in the neighborhoods. Despite the new leaderships imposed in the neighborhoods by the ruling party, the historical leaders represent a very present and influential role. They have built their leadership over more than 25 years. They are not temporary leaders in attendance to a project or a government. Their leadership is rooted in direct contact with the wide network they have woven throughout their lives. They are closer to promoting community organizational practices, solidarity, and equality.

For them, the task of organizing, mobilizing, and management of the social demand of the inhabitants is a fundamental part of their lives. Because of this, the new neighborhood leadership imposed does not manage to mobilize or make a dent in the leadership of women who, like Elsy, Eva, Maritza, and Karla, have forged themselves in the struggle to conquer space in the city and inhabit Sol de Libertad.

Undoubtedly, these women have played a determining role in the construction of their neighborhoods. Their knowledge of the territory and its people is essential, knowledge of the diversity of inequalities in the neighborhood, in order to work together with the population and hand in hand with its new leaders. Placing the different territorial scales of urban injustices at the center for the construction of a sustainable, democratic, and sustainable urban agenda.